A Slight Change of Plan

As planned Dapto Seniors' Walking group arrived at Wollstonecraft Railway Station successfully on a warm and sunny autumn day and attempted the walk via Berry Island to Waverton. Unfortunately the torrential rain of the previous few days had made the track very muddy and after a quick reconnaissance it was decided that discretion was the better part of valour so the group returned to the railway station.

After quick discussion it was decided to take the next train to Milsons Point and walk across the Harbour Bridge. The group has done this popular walk a few times before however one member present had missed those trips so it being such a lovely day it was an easy decision to walk it once again.

We stopped for a coffee at one of the Milsons Point shops before climbing the staircase to the footpath. As usual the views captivated everybody as we walked across.

At the staircase on the southern end of the bridge it was decided to continue on the Cahill Expressway to Government House and see if we could get tickets for a guided tour of the vice regal house. When we arrived we were in luck and obtained tickets for a 1pm tour only half an hour later which gave us time to eat our lunch.

The tour was very interesting with the guide putting an emphasis on the personalities who had been governors over the preceding 200 years. The guide also gave an interesting but brief talk on the previous buildings used as Government House before the construction of the present one.

After the tour we walked to Martin Place Railway Station where we arrived with minutes to spare for the train back to Dapto.

Everybody agreed that it had been a very enjoyable and successful day. 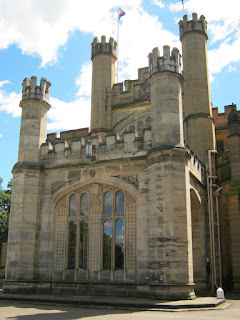 Posted by CPSA Dapto Seniors at 12:01 am