Dapto Seniors has a few events during Seniors' Week in which members of the public are invited to participate.

Why not drop in and try carpet bowls?

If 8am is a bit too early don't worry, just come a little later.

This is a very social group always open to new members. Their game is Whist.

Don't know how to play? Don't worry they will teach you.

Why not come along to one of these activities and try them out? A cup of tea and biscuits are always available. Don't stay at home, get out and have fun.

For more information about the many activities at Dapto Seniors simply click on the Club Activities tab at the top of this page. There is bound to be something you will enjoy.

Club members are going to the Premier's Concert at the Sydney Entertainment Centre. We understand that Leo Sayer is one of the many artists providing the entertainment.

Dapto Seniors members are keen concert and musical goers. The club takes advantage of the generous discounts available for group bookings to all the top shows. This year The Lion King, Strictly Ballroom and the return of Wicked are already booked as well as regular visits to the region's own wonderful Roo Theatre.

Why not come along to a meeting to find out what is on offer?

The next bus trip is to the Jewish Museum in Sydney. Tickets will be on sale at this meeting.

There was a full bus for the club's March bus trip to the Tramway Museum at Loftus. 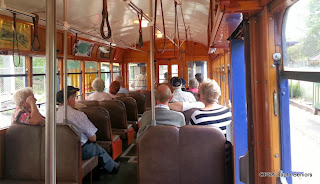 The group had two tram rides as well as a talk about the interesting trams in the Museum's care. Afterwards the group adjourned to the Engadine RSL for a chat and, of course, lunch. 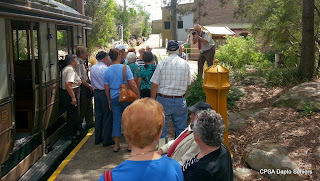 Russell organised another picnic for Thursday 6th March. This time it was held at Cordeaux Dam where the water catchment authority maintains excellent facilities. The weather was a big improvement over the previous picnic and everybody had a really enjoyable time. 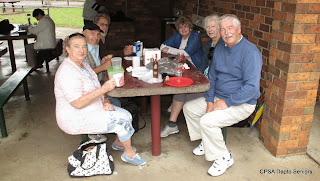 After lunch everybody ventured down to the dam wall. 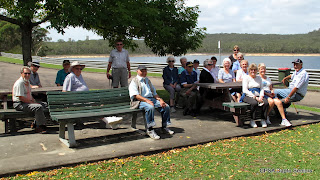 Keep an ear out at a future meeting for the next event Russell organises; they are great fun.

The annual club picnic is to be held on 3rd April 2014 at Integral Energy Park along Darkes Road. Maureen is organising another splendid feast for club members. Unlike the BYO picnic at the club picnic food and entertainment is supplied.

Tickets for this event will be on sale at the next meeting. Still only $10 but remember to bring cutlery, a cup and plate.

A good number of members attended the preview performance of Jesus Christ Superstar at the Roo Theatre in Shellharbour. Everybody enjoyed themselves despite the somewhat damp weather.

Our theatre visit organiser has distributed the club's tickets to the Premier's Seniors Week Concert on 19th March but she is also taking names of members who wish to go to Strictly Ballroom - The Musical (August)and the new performance of Wicked (probably November).

One of the advantages of being a member of this club is the availability of discounted theatre tickets due to group bookings. Ask Jackie at the next meeting about future shows.

Russell has organised another BYO picnic for the 6th March at Cordeaux Dam. If it is anything like the last one we had at Fitzroy Falls it will be a great day out. Bring your own food and drink, there are plenty of shelters, seats, electric BBQs and hot water available at the dam recreation facilities.

For those who have put their name down for a lift to the event remember to meet at the hall at 9.30am. Don't miss out.

Maureen has organised the club's annual picnic for 3rd April at the usual venue next to the Australian Motorlife Museum in Integral Energy Park a short distance along Darkes Road from the Kanahooka/Princes Highway roundabout. Tickets for this event will be on sale at the next meeting,it's still only $10 for a smashing meal, fun and games. Those who attended last year will remember what a great success it was. don't forget to bring your own cutlery, cup and a plate.

The walking group will have its first walk of the year in Kiama on Friday 21st March which co-incidentally is during Seniors' Week. Catch the 10.22am Kiama train at Dapto Station where Jim will be upstairs in the second carriage. Members can bring their own lunch or buy something on the walk. Should be an interesting day out.

If you like playing cards then why not join our happy band of card players each Wednesday in the Laurel Room at the Ribbonwood Centre starting at 9.30am. Bring a packed lunch; tea and coffee is available. This is a very social group and new members are always welcome - why not try it out?

The Father's Day Lunch originally planned for 4th September has been put back a fortnight to the 18th September due to a clash of dates with another local society.

It is not a big problem for us but just remember to change the date listed on your membership card.

Our first lunch this year will be in May - keep an eye out for an announcement of when tickets go on sale.

The next regular meeting is on Thursday, 13th March at 10am - more details later.