Once again the club celebrated Christmas in fine style. Over 110 members attended the annual Christmas Lunch at Dapto Leagues Club.

When they arrived members were handed a chocolate Father Christmas courtesy of our President and they put their ticket in the barrel for the monster raffle. All the tables were beautifully trimmed with decorations kindly supplied by the Club.

While members settled into their places there was plenty of time for talk as they reflected on the club's successful 50th Anniversary Year and the room buzzed with chatter until the girls started to serve the Christmas meal. It was a choice of roast chicken or loin of pork followed by a desert of trifle or Pavlova, now the room was almost silent as members enjoyed their feast.

Following the meal there was a short presentation of Branch Life Membership to one of our past presidents, a man who had served in that role for 5 years. He joined CPSA Dapto Seniors in 1991 and had devoted much time and effort in the service of our club. A well deserved award. 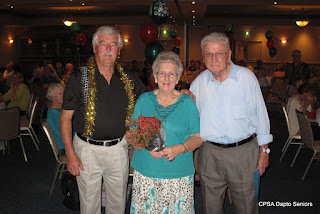 Following this short ceremony the leader/organiser of the popular craft group delighted the company by presenting the club with a cheque for $500 which they had collected from the sale of the beautiful articles they had made during the year. Our President gratefully accepted this generous gift from our lovely ladies. 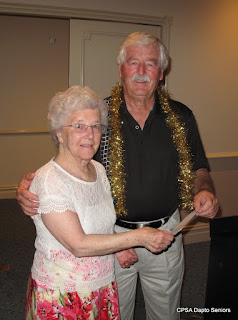 Now it was time for our raffle, in fact, two raffles; first the craft group drew the winners of the wonderful quilts they had made. Then it was time for the main event; this year there were so many prizes just about everybody went home with a gift. A big thank you to all the people who donated prizes.

Guess who called in during the raffle? It was Father Christmas! Not only did he wander round dispensing Christmas cheer he also stayed on for members to have their photograph taken with Santa as a happy way of remembering the final club event for 2012. 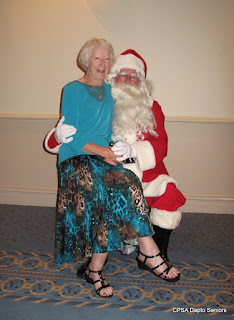 At the end of proceedings people seemed almost reluctant to go home but never fear, next year there will be more lunches and lots more fun. See you then...

Remember... our next meeting and AGM is on the 17th January 2013.Usual time - usual place.

Over 100 members will be there, all the usual fun; a great meal, massive raffle and good company.

Looking forward to seeing you all.

Looking forward to seeing you on Thursday.

A note for your diary...

The first club meeting next year is on 17th January 2013. Remember to take an envelope at this meeting for next year's membership.